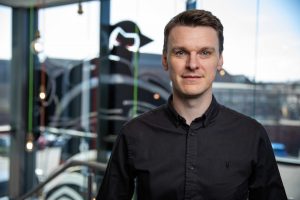 In the first instalment of our TIGA Awards 2021 winners interview series, we spoke to Atomhawk MD Tim Wilson about what it meant to pick up the Best Art/Animation/Trailer Supplier award, the need to recognise excellence across the games industry, inspiring peers and what we’ll all be talking about in 2025…

It’s great to be recognised for our ongoing commitment to quality. We also got a very cool trophy for the cabinet!

The TIGA awards are a fantastic celebration of success from across the UK gaming industry. They shine a spotlight on established British success stories, the infrastructure that supports them and also the next generation of talent.

StudioMDHR (Cuphead) are inspirational because love, effort and craft are the very things that makes their games successful.

Opening a studio in Vancouver, holding an exhibition of our work in a public museum and creating one of the most popular training courses on ArtStation’s learning platform.

Technology that hasn’t been invented yet! And Pokemon.

Atomhawk is the games industry’s go-to partner for ideas that move from concept to completion. Its colourful pool of creativity enables it to achieve extraordinary feats that would be impossible alone. They bottle that lightning, building whole worlds of wonder from even just a single thought to make the unbelievable, believable. www.atomhawk.com